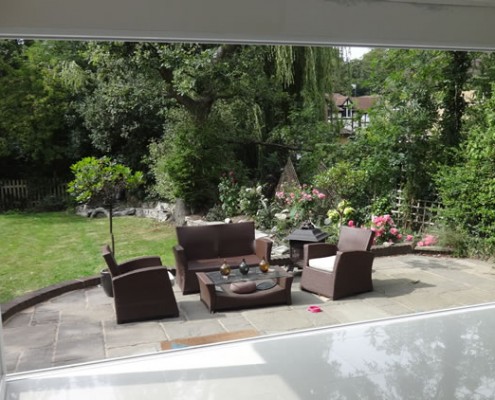 One of our most recent projects was the undertaking of a large 6 part Set of Origin Bifolding doors with matching side lights and kitchen window. The client was spending a large amount of money on a high end kitchen refit. With the benefit of already having a large structural opening in situ the focus then turned to what could compliment the new kitchen design. To make the best use of the potentially large open space occupied by the current French doors and windows, after viewing some installations and reading through our web site a phone call was made, and we were invited to quote for the works.

On the first visit to the property we were told we were one of few local suppliers quoting for the contract. After going through various configuration options and discussing the products that would suit and ultimately make the best use of the potential space on offer it was decided the Origin easi fold doors would give the uniformed look the customer wanted to achieve. The perfect clinical profiles you get with aluminium products made them the ideal choice.

The clients requested we remove the French door and windows, whilst also removing the brickwork under the windows to create a level surface running around the entire area.
After showing the client a CAD design of how the doors and windows would look, we went through the dimensions to determine the depth of the folds to neatly tuck into the recess either side of the wall. The decision was made, an internally opening six fold system with two side return windows replicating the doors themselves. With a white gloss finish inside and out, matching hardware and gaskets the order was placed, surveyed and signed off into production.

The installation took place over two days. We assigned two teams to ensure a smooth installation due to the amount of work involved. We had a one day window to secure the property after the opening had been prepared.

The objective was to remove the old timber frames and grind out the brickwork below the windows. We then had to install a 100mm thick steel RSJ which ran across the entire width of the doors to be supported by the load bearing corner posts and steel packers. This was a necessary precaution due to the timber construction of the roof and certainly would eliminate any risk of the framework above warping, moving or sagging over the coming years. This would inevitably affect the operation and functionality of the doors and potentially cause major disruption in future.

Our two teams concentrated on setting up the six doors to ensure the smooth gliding and locking operation associated with the Origin easi-fold system. There was also the kitchen window to be installed, plaster boarding, plastering, cleaning and sealing. We pride ourselves on the quality of our fitters and the speed at which they work.

As you can see from the pictures above we can’t imagine any products other than bifold doors occupying the space. They really do compliment a wonderfully modern kitchen and their functionality make the best use of the space available. The satisfied customer has the option to use the bifold system as French doors and open either side. However, it’s when the doors are fully folded back the connection to the garden and sense of openness really stands out. Bi-folding doors are such a great product for consumers and developers wishing to create an open contemporary space.

Want to join the discussion?
Feel free to contribute!